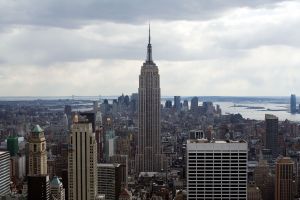 I’ve had a little theory marinating in my mind for the last few months – nothing groundbreaking, but something I thought I’d share with you. It’s about the psychological impact of environments, but it has some interesting applications for location and destination marketing.

There’s a lot of research looking at the effect an environment can have on the human mind and body (For Example: Health Psychology: What is an unhealthy environment and how does it get under the skin?).

Similarly, there’s a lot of research looking at the human tendency to compare themselves with those around them (For example: Classic and current social comparison research: Expanding the perspective).

What if people sub-consciously benchmark (or compare) themselves to the most dominant things they see in their environment? Depending on what dominates their environment, their sense of happiness and self identity could be affected in any number of ways…

When the dominant things you see around yourself are man-made (think of the Empire State Building) you would tend to bench-mark yourself against the actions and achievements of your fellow man. This may inspire competition and creativity or lead to feelings of inadequacy and envy.

When the dominant things you see around yourself are natural (think of the Vancouver Mountains) you would tend to bench-mark yourself against the achievements of nature. This may inspire introspection and entrepreneurship or it may lead to a sense of complacency.

So what could we take away from this theory on environments?

If this theory is right, the key to successful location and destination marketing wouldn’t lie in functional features or cliché taglines, but rather in understanding and communicating the deeper psychological effects delivered by an environment on its inhabitants. For example:

- NYC - Supercharges your competition chip, or

After all what could be better than taking a mental break?
Posted by Nick Black at 12/07/2008
Email ThisBlogThis!Share to TwitterShare to FacebookShare to Pinterest
Labels: Insight, Strategy, Thinking
Newer Post Older Post Home