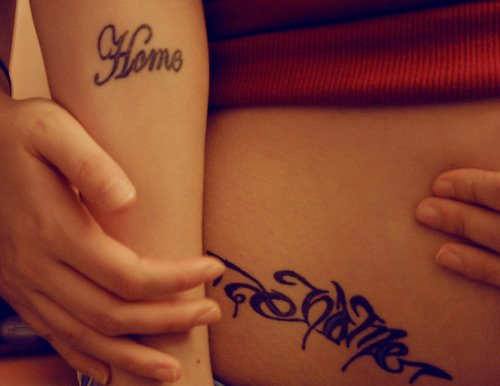 I was in a bar the other night having a beer with a few advertising and film-making friends. The bar itself was filled with all the usual suspects, but one person in particular caught our eye; a waitress with some very unique tattoos.

Always on the look-out for a story, when the next round of drinks were ordered we struck up a conversation with the waitress - keen to understand the history behind her canvas. Although many dots were left unconnected, she shared with us an amazing story of her childhood in Japan (as a red-headed Canadian girl) and of her teenage years spent in Canada (as a blue-eyed Japanese girl). Transitioning between two countries, she was Japanese in all but looks - at home in Canada but culturally homeless.

This discussion sparked an interest in me, so I decided to look for some more information on the topic of tattoos. In fact, there are many interesting studies exploring the link between tattoos and psychology (For Example: Tattoos and antisocial personality disorder). Without getting into the details, here are some key points discussed:

Tattoos may represent an ‘exo-skeletal’ defense against the world

You’ve probably seen the tattoo stereotype before - the angry rebel or the cocky kid with something to prove. But what if the opposite were true; that instead of representing anger or cockiness a tattoo is a sign of vulnerability? It would seem that tattoos actually represent a safety blanket for their wearer, helping to defend them from the hostility they perceive in the world. We all need our shields – for some it may be a four-wheel drive, for others it’s a tattoo.

Tattoos may fill the role of a ‘transitionary object’

The objects and products we choose to surround ourselves with serve more than a ‘functional’ or ‘rational’ purpose; they also help us meet or medicate our psychological needs. But what happens when we’re forced to make a transition in life and leave things behind? For some people tattoos may help fill the role of possessions; giving them belongings and a sense of belonging, no matter what.

So much of what we experience as humans is emotional, indeed the famous neuroscientist Prof. Antonio Damasio believes the existence of human emotion may have been the key to our species’ survival. But what happens when we’re unable to properly express our emotions? Where words fail, other means emerge – for example through action or, in more extreme cases, tattoos. It’s ironic that one of the first things we often do when seeing a tattoo is ask ‘what it means’ - the research would suggest that when people have a tattoo it’s because they couldn’t answer that question in words.

So what can we take away from these findings on tattoos?

A tattoo is much more than just ink and flesh. In fact, you could think of a tattoo like a little emotional advertisement…communicating to others our feelings, our belongings and defending us psychologically from the world in which we live. It’s no wonder we noticed the waitress in the bar – her tattoos were communicating something to us, and like all good advertising we were intrigued.
Posted by Nick Black at 12/06/2008
Email ThisBlogThis!Share to TwitterShare to FacebookShare to Pinterest
Labels: Insight
Newer Post Home